The island of Hydra - a unique experience

Hydra - or Ìdra as it is pronounced in Greek - is part of the Saronic group of isles, located relatively close to Athens and Peloponnissos. You can see the coastline and mountains of Peloponnisos from Hydra. The island has approx. 2500 residents, it is oblong in its shape, full of mountains and poor on farmland. The area is 48 square kilometres of which only a small part is inhabited. The name "Hydra" relates to water and descends from the many fountains of water, which was common in the old ages. Also the island still has many old wells and antique aqueducts built to divert the huge amounts of water from the mountains. Today the island is not even selfsupplied with freshwater for drinking and household. Earlier water was shipped in by freighter twice daily from Peloponnissos, but since 2014 the island has had a sea water cleansing facility which has improved the quality of water substantially.

Hydra is the jewel of the Saronic Gulf with rich tradition and culture that is highlighted particularly during the summer. Its natural beauty and well-preserved architecture is mainly concentrated in the main town, and attracts hundreds of visitors from Europe. The island became cosmopolitan in the mid 1960s as it was the favorite retreat of many renowned Greek and international artists. Since then, the cosmopolitan atmosphere of Hydra is still preserved around a beautiful setting full of neoclassical mansions, imposing buildings and museums.

Check out what Lonely Planet says about Hydra:

What to expect in Hydra

What NOT to expect in Hydra

Historically Hydra was inhabited by shepherds. The island was covered by forest in the old ages, but several forest fires, including the latest one in 2007, have cut back the green pine forest and Hydra is dominated by rough and bare mountain landscape. In the 15. century the island was inhabited by people who fled the expansion of the Ottoman empire throughout Balkan. Greece was occupied by Turkey for nearly 400 years (it ended 1821) and during this time Hydra remained largely independent and is very proud of this till this day. The island has strong traditions within ship building and maritime/the navy, and the island played a special role in the war of liberation which led to independence in 1821. This is celebrated every year in the last weekend of June - the Miaouli Festiva. Captain Miaoulis is the most famous maritime hero from Hydra, a statue of him can be seen at the cannons on the left side of the port entrance. If you want to know more about Hydra's history you should visit the local museum open in the mornings or in the evening from 18-20. It is located at the port entrance (on the way to the cannons) next to the still existing and active naval officers academy.

Hydra is completely preserved by the Greek government, which means not only single houses but the entire island. Cars, scooters and even bicycles are prohibited. The only exeption is the town garbage trucks - so small that they can pass through the cobble-stoned streets. All houses are built in traditional Hydrean style, the streets have cobble-stone and even new buildings must be kept in traditional style. As such also swimming pools are prohibited although some private house owners seem to have overseen this rule.

Mule drivers and boat-taxis are the most common means of transportation - and of course you should expect to walk on your feet if you want to see more than just the vibrant harbour area. Building supplies and furnishing houses may be quite a logistic challenge. A new washing machine may be purchased in Athens, sent to the harbour, shipped on a boat to Hydra, offloaded on the harbour front in Hydra and from there you pick it up yourself by booking a mule that will carry the washing machine to your house.

The inhabitants of Hydra primarily live of tourism and secondarily fisheries. There is a complete and well functioning local community with a public school, high school, doctors, a small hospital, city hall, several banks, many local craftsmen and small building companies, specialized in the special building techniques of Hydra. One should not forget the mule drivers - the "freight company" of the island - and it is often sarcastically said that the mule drives have the biggest bank accounts of all !

The island is visited by thousands of tourists every year of which approximately half are Greek. There is no charter tourism and back packers are rare. The tourists represent all European countries, USA, Japan, China, Russia, Australia, Canada, etc. The natural and old harbour of Hydra draws many sailing entusiasts and Hydra is often a great, first stop from Athens for sailing families cruising the Aegaen sea on their own. Artists and architectonically interested people are common, as well as one day tourists who really miss out on the wonderful serenity and beauty of Hydra once you leave the harbour front. You may read various artists description of their Hydra adventure by following this link:

Many famous people have visited the island through the decades and the government often brings heads of state for a short visit to Hydra to experience an authentic Greek environment. One of the famous people who keeps coming is Canadian singer Leonard Cohen. He has owned a house in the small fishing village of Kaminna since 1960 and lived for a number of years in Hydra. You may read Leonard Cohens own description and photos of Hydra by following this link:

The harbour front in the main town of Hydra is a wonderful and lively chaos. Local people and tourists mixed, shops, cafés and tavernas. After 5 pm, when the one day tourists leave the island, the harbour front calms down and a relaxed atmosphere descends. If you move away from the harbour front, you will feel that time stands still in the narrow and cobble-stoned streets. The town has many shops, both traditional tourism gift shops, clothing, gold and silver, ceramics, spices and herbs, art shops and paintings.

Apart from the main town of Hydra, the island has 3-4 small fishing villages with belonging beaches and a single taverna. Miramare (Mandraki Bay), Kaminia, Vlichos and further away other small beaches even more isolated and peaceful. They can be reached by foot - hiking - or by boat taxi - or a combination of walking and sailing. In these small fishing villages live is as slow as it gets and relaxation is unavoidable as well as the pleasure and taste of truly homecooked Greek food. You may spend all day at the beach, hiking, enjoying the great views of both mountains and the sea, and dining slowly just a few metres from the sea.

Hydra has great possibilities for hiking although you should know that the roads are not paved or with asfalt, they are with gravel or simply mule and goat paths, so do wear good shoes and remember to bring water. You can visit monasteries with active nuns or monks (they live in separate monasteries). You may walk along the island or across the island to the other side to an area called Klimaki, it takes about 3 hours. The view is fantastic. In the old days people lived permanently on this side of the island, they were self-sufficient, sold olives, olive oil and sponges from the sea. You may find more information and a map on hiking trails here: http://www.hydra.com.gr/trekking/?lang=en

Please do not think that Hydra is boring in spite of the idyllic scenery, no cars, etc. Hydra has many bars, tavernas and restaurants in different price ranges. Some are difficult to find, others are located on the harbour front next to the harbour coffee shops. Most bars play Greek music and just a few play English/American music.

The culinary level of the tavernas is high compared to many other tourist destinations in Greece, simply due to the high number of Greek tourists. Yes, the best goes to the Greeks !. In Hydra, you will experience the authentic Greek peasant kitchen and a wide variety of dishes. No frozen vegetables and most places even "chips" or "French Fries" are freshly made, hand cut and fried. We recommend a number of good dining places where we or our guests at VillaHydra have had a nice experience. Please read more at Restaurants.

Children can play and move around safely - you need no worry about cars or scooters and for many parents it is nice to be able to eat at a restaurant without worrying about the kids all the time (in general children are very welcome at Greek restaurants but please notice that the Greek children are also very well behaved !). The most important thing to teach your child is to step aside when a mule passes. Hydra will give you wonderful big and small experiences for all of your senses !

You may read more about Hydra in this website as well: 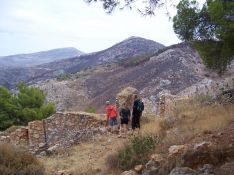 In July 2007 Hydra experienced the worst forest fire in 20 years. Large areas of the mountains and some houses were swallowed by the flames. Luckily, no one died. The inhabitants of VillaHydra were very closed to being evacuated due to heavy smoked. The fire figthing was difficult, nearly impossible. With no roads and thus no fire fighting vehicles able to approach the flames, we witnessed 25-30 local young men walk into the darkness and towards the flames at night from our house. They carried shovels only. The temperature was nearly 43 degrees Celsius and the wind was strong. Fire fighting vehicles were carried by sea freight from Poros to Hydra but with no roads around the island they were basically stuck and could go no further than to VillaHydra. Seaplanes flew low and frequently and tossed tonnes of water to the flames. They especially tried to save the monastery of nuns, Agia Triada, which is visible to the north from VillaHydra. Luckily the flames somehow went around the monastery. Large areas of green and forest were left black and scorched. It takes years before they turn green again. Now, 6 years later, many places have new, green trees and bushes.